Not all training agencies are the same!

We are NOT interested in being the biggest training agency, ONLY the best at what we do...  Producing Quality Safe and Competent Divers at all levels of the Industry from Recreational to Professional Diving...

We offer here a unique insight into the core values of the ITDA Group and our motivation to be the highest standards training agency, based on quality and not quantity, i.e.

We are unique in many ways in the Sports diving world as not only do we accept multi-agency instructors and divers but we actively encourage them... ITDA Group International and the International Technical Diving Agency, offer the highest quality, value for money and highest training standards in the Industry...  Please cover this page carefully and if you have any questions email us and we will respond quickly: admin@diveitda.com 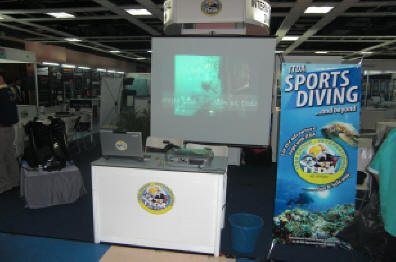 The biggest diver training agency in the world is the American giant "PADI", Professional Association of Diving Instructors.

They have recently been bought and sold a few times over the past few years and the agency and their professionals are considered as market leaders.

ITDA Executives; Steve and Georgina with their Award for safety standards.

The Industry Intelligence business "Owler" has up to date info on all training agencies. The links below offer an independent insight into our industry...  See this link: https://www.owler.com/company/padi  And to compare ITDA please use these two links... We have two main business sites; the International Technical Diving Agency...ITDA Group International - https://www.owler.com/company/itdagroup

See our unique charts which offer a graphic vision to compare ITDA with PADI and CMAS by Depth / Course / Pro-fees.

Are there many other agencies? 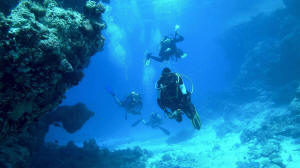 YES! There are, many other training agencies around the World, in fact hundreds of them, and new ones coming up all the time but the main players remain.

Anyone looking to learn to dive or divers looking to advance their certifications or to become professionals, should look at the training agency very carefully and consider all of the options.

See also lower part of this page for a list of all training agencies meeting International standards.

We at ITDA work harder to provide you with the best, safest and most fun training because we understand that YOU have a choice!   And we want YOU to choose us!  ITDA should always be YOUR First Choice! and we want you to recommend family and friends to us...  We have a great referral and reward service... Ask your ITDA Instructor for more details as benefits vary from training partners worldwide... Or mail us directly at admin@diveitda.com

NOTE:  The comments below are from different sources of whom many are multiple agency professionals who have crossed over to ITDA, and where certified professionals with; CMAS / SSI / NAUI / PADI / ITDA / IDEA / BSAC / IANTD / TDI/SDI etc.  This is NOT the expressed view or opinion of the ITDA Management...  It is the ITDA management view that all of the major training agencies operate professionally and to high standards, following the ISO - ANSI/EN International standards.

PADI programs may change from time to time but generally their basic diver program is the PADI Open Water Scuba Diver which is an International Diver certification.

PADI are also probably the largest scuba diver training agency in the world and as such they have a global network of affiliate diver training facilities around the World.

Size of the organisation

PADI has a Fast-Track System for Professionals and Specialist certifications

CONs for PADI (Against PADI)

Because of the size and popularity of PADI they have a lot of market saturation which may lead to certain areas or territories have multiple PADI dive schools in close proximity causing a "Price War" scenario for the private operators of these businesses.

This may "Appear to benefit the consumer", but to reduce operations costs operators may cut corners, including poor employment conditions and low wages for instructor etc.

Training very fast to certification from 3 days or less, with a minimum standard of just 4 Open Water Training dives and 5+ pool sessions (Depending on the training Centre!)

PADI have good International resources and representatives in many regions but are a United States (USA) based business.

CMAS are traditionally a European body but operate worldwide. They have been training divers since 1958 and some very famous name where involved in the early days including the TV Celebrity;  Jacques-Yves Cousteau who was a founding member.

One Star Diver - "a diver who is competent in the safe and correct use of all appropriate open water scuba diving equipment in a sheltered water training area and is ready to gain open water diving experience in the company of an experienced diver.

Training dives may be up to 10 dives or more experience.

Long standing history of diver training on an International level since 1959.

CMAS are a serious training body and focus on safety and training for emergency situations.

CONs for CMAS (Against CMAS)

CMAS Professionals tend to be multi-agency.

Up to 10+ Open Water dives required for certification.

SSI Philosophy (Taken from their website) Knowledge replaces anxiety and fear with correct information. There are many ways you can start an SSI program offers traditional training, home study or online training. No matter which way you decide to take the program, it will be taught the same way  using the SSI Total Teaching System. During interactive review sessions, your SSI Dive Professional will teach you how 'land value' what you learn out of the water relates to 'water value' what you do with information in the water.

The best way to learn essential skills is through continuous and correct repetition. The goal of this repetition is to learn the skills so well that they can be performed automatically, and without conscious thought.

This is SSI's signature water training method: Comfort Through Repetition.

We believe it is vital to take plenty of practice time to develop the skills necessary to become a competent and comfortable diver.

Your SSI Dive Professional will lead you through a series of comprehensive skill exercises for you to practice until they become second nature.

Of the many 100's of other training agencies out there around the world are many national federations and Club Systems.  (ITDA also has an International Club System which follow the exact same certification standards as our International system.

The majority of people will learn to dive based on the recommendation of friends and family, and or as an act of convenience. (You are on vacation / holidays and there is a dive school at or close to your resort or hotel... This is very common!  So please do not be overwhelmed by the sheer number of agencies below:

List from Wikipedia of diver training and certification agencies...

Organisations which publish standards for competence in recreational scuba diving skills and knowledge, and issue certification for divers assessed as competent against these standards by affiliated schools or instructors:

ITDA International Technical Diving Agency, are the only training and certification agency to offer; International standards in: Sports Scuba/Recreational Diving, Technical and Advanced Specialist, First-Aid and Medical Programs, plus; Occupational and Professional Diving...  Plus much more!  See about ITDA page

ITDA offers unique benefits to it's members by sharing discounts and offers from our training partners... link to our "About Us" page to see details about our ITDA team.

ITDA and IHMP are a global family of like minded people with similar aims and goals; Primarily to make diving safer and even more fun, with higher education and skills performance required for certification.